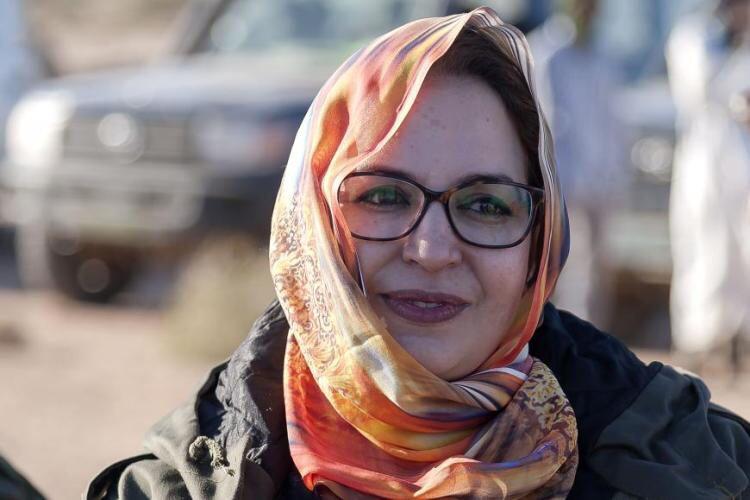 Adala UK: Morocco must immediately cease the harassment and intimidation of Sultana Khaya

It is somewhat ironic that people and organisations working on human rights, whose role is to report human rights violations in the Occupied Territories of Western Sahara, are those who find themselves at risk and without protection. The case of the human rights defender Sultana Khaya is a clear example of this situation. The Moroccan occupation authorities should immediately take the necessary measures to ensure her safety in the face of the serious threats that she currently faces.

“My last ordeal began on 19 November when I returned from Spain, having been there for medical reasons. I was stopped at a checkpoint as I entered Boujdour (Western Sahara) and my details were recorded in a very humiliating way,” Sultana notes. “The Moroccan agents ordered that when I got home, I was to stay at home and not see anyone. They told me in no uncertain terms that if I tried to make contact with other Saharawis there would be serious consequences. I said that I was committed to defending the rights of my people and that they should arrest me there and then if that was what they wanted to do. One of the agents threatened me saying that not even God would know what he was going to do to me if I didn’t follow his orders”.

Her peaceful resistance in the face of the harassment she was later subjected to has been drawing attention from the international community and mobilising groups to denounce the serious situation that the civilian population is enduring in the occupied cities of Western Sahara: the dangers faced by activists following the violation of the ceasefire by Morocco and subsequent end of the ‘Settlement Plan’ which has been in place since 1991.

Since 19 November 2020, several Moroccan police units have imposed a siege around her house, subjecting her and her family to physical and mental abuse with the intention of forcing them to stop their peaceful calls for Saharawi self-determination and independence.

The human rights activist and her family are under house arrest, imposed without a court order or any legal justification. Police vehicles are blocking the entrance to the house. On several occasions, whilst attempting to leave the house, Sultana has been attacked physically. Soldiers and police officers are also preventing other Saharawi activists and friends from visiting her at home.

On 13 February, Sultana was waving a large flag from the roof of her house. The Boujdour police commissioner threw a stone at her which hit her head. The videos and photos of the assault and Sultana’s head injuries have been shared widely on social media. The following day, dozens of Sahrawi women surrounded Sultana’s house in solidarity with the family but they were beaten and ill-treated by police officers.

“The activist and human rights defender Sultana Khaya is the most recent victim of the campaign by the occupying Moroccan government to silence those who criticise its illegal occupation of Western Sahara and the serious human rights violations committed against the Saharawi people” commented Sidahmed Alyadasi, member of Adala UK.

These serious violations will continue to happen whilst the Moroccan government’s record on human rights continues to deteriorate. This is just the most recent chapter in the incessant desire on the part of the Moroccan authorities to limit the right to freedom of expression of Sultana Khaya and subject her to intimidation. Adala UK asks the Moroccan authorities to immediately and permanently stop the harassment and intimidation of this brave defender of human rights, something to which she has been subjected for many years.

Adala UK requested that the United Nations and the International Red Cross provided immediate protection to Sultana and her family to guarantee her safety. The Moroccan occupation authorities should investigate the threats and aggression suffered by Sultana immediately, impartially and independently, bringing anyone suspected of criminal acts to justice and guaranteeing the safety and security of Sultana and her family, ensuring they are free from threats and political pressure so that she can continue to freely and safely carry out her important and legitimate work.

The Saharawi people are exposed to serious human rights violations due to the occupation by the Kingdom of Morocco. The United Kingdom is a country that respects human rights and as such should abstain from anything that might contribute to violations of human rights in other countries. Human violations arise from violations of the norms of international humanitarian law. Therefore, Adala UK calls on the United Kingdom to not include Western Sahara in any trade agreement between the UK and Morocco without the consent of the Saharawis, as this would undermine the right to self-determination of the Saharawi people whilst simultaneously strengthening the Moroccan occupation, a situation which is illegal under international law.