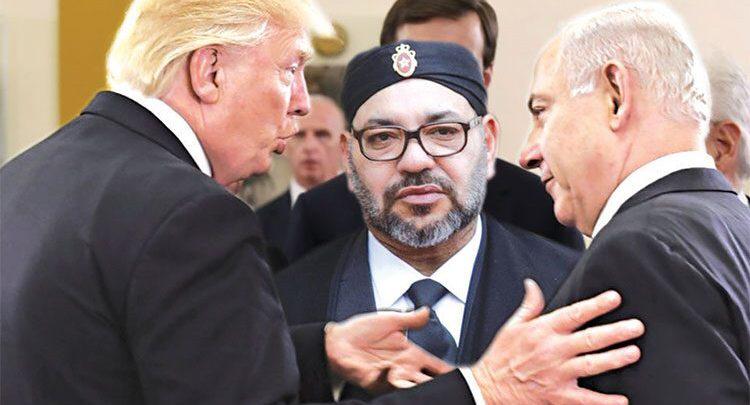 December 22, 2020 Written by AdalaUK. Posted in Most shared No Comments

The USA’s recent recognition of Moroccan sovereignty over the occupied territory of Western Sahara violates international law and long-standing treaties. All countries must stand against this new and unprecedented US stance, especially since Western Sahara, as outlined by numerous UN resolutions, is still considered a territory awaiting decolonisation by its administering power, Spain.

The decision by outgoing President Donald Trump to announce that the United States recognises Moroccan sovereignty over the entire territory of Western Sahara was made in exchange for Morocco establishing diplomatic relations with Israel, thus joining other Arab countries that have recently done the same with the support of the USA, including the United Arab Emirates and Bahrain.

This declaration is an offensive move. It encourages Morocco to continue its systematic desertification of the Sahara and its continuing attempt to erase traces of the culturally distinct and compassionate character of Western Sahara. It is a flagrant violation of the resolutions of the United Nations General Assembly and the resolutions of the Security Council, especially Resolution 1514 (the Declaration on the Granting of Independence to Colonial Countries and Peoples). For Morocco, giving in on an issue as sensitive as Israel had to be for a very big prize, and there is no bigger prize for Morocco than its claim to sovereignty over the Sahara

Since 1963, there have been very clear guidelines established by the United Nations in all its resolutions that affirm the right to self-determination of the Saharawi people, in accordance with Resolution 1514 adopted on 14 December 1960. Later, the International Court of Justice, by means of an advisory opinion on 16 October 1975, unanimously agreed that Western Sahara at the time of its colonisation by Spain wasn’t a land without an owner and that Morocco had no sovereign rights over the territories of Western Sahara. In addition, it ruled that Resolution 1514 (XV) of the United Nations General Assembly on the granting of the right to self-determination must be implemented.

Trump’s announcement undermines the agreements that have existed between Morocco and the Polisario Front and the other parties involved. It threatens security and stability in the region, and goes against the USA’s previous commitments to always encouraging the political process. It completely undermines the essential peace process, as the question of sovereignty over Western Sahara is one that remains in the negotiations between the Kingdom of Morocco and the Polisario Front under the auspices of the United Nations.

This decision by Donald Trump torpedoed the peace process and turned the US administration into Morocco’s partner in the occupation, rather than continuing its role as a state sponsor of peace. This is an attempt to erase the identity of the people of the Western Sahara and deny its people their legitimate rights. The international community must therefore take a collective stance against this crime committed by the President of the United States. This stance will have international impact, especially its attempt to erase the identity and therefore violate the rights of the people of Western Sahara.

So many countries have rejected this stance and considered it a unilateral and regrettable decision that will not affect the position of Western countries, the international community and the United Nations. Any decision to unilaterally recognise Morocco’s sovereignty over Western Sahara affects the political process and the possibility of a resolution to the Moroccan-Saharawi conflict, which undermines the right to self-determination.

Adala UK urges the international community to go beyond condemning President Trump’s unilateral decision. Instead, we must work together to do everything in our power to put pressure on the next US administration under President-elect Joe Biden to ensure the current US stance is reversed as soon as he assumes the Presidency. This is a thorny issue given that it could damage the normalisation of relations between Israel and Morocco. But an important one for the people of Western Sahara.

The position of Western countries has remained clear, since it was obvious that Trump’s announcement should be rejected as it violated the fragile treaties of the Moroccan-Saharan conflict, and in turn, would intensify the situation in the conflict zone due to the possibility of new hostilities. This would contribute to increased instability in the Sahel region. Countries have therefore called for the legal status of the Western Sahara region to be respected in order to prevent new conflicts not only between the two parties, but also between other countries of the world and the current US administration.