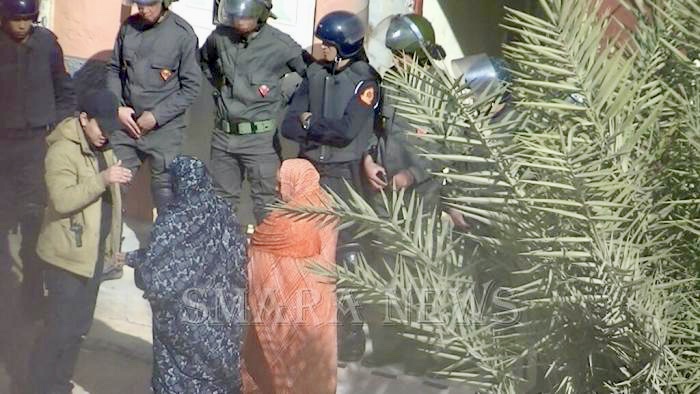 November 21, 2020 Written by AdalaUK. Posted in Actions, Most shared

Activists, demonstrators and journalists have been detained without arrest warrants following peaceful demonstrations which have been taking place since Thursday 12th November 2020. Many more are at risk of arbitrary detention.

The day after the demonstrations, the Moroccan authorities launched a campaign of arbitrary detentions towards Saharawis who had participated, in the neighbourhoods of Maatala, Batimat and Shara Smara in Laayoune. Many people have already been detained whilst others are at risk of detention and prosecution in the coming days. Detainees include journalists trying to report on the situation on the ground.

Witnesses have confirmed with Adala UK that some detainees are being held at unknown locations, are being prevented from making contact with the outside world and have been denied access to lawyers.

The Moroccan authorities instructed local and national media channels not to cover the events or interview people who might criticise the government or the political situation in Western Sahara more broadly.

Please act by writing, e-mailing or calling members of the UNSC to express your views on the need for international support for the Saharawi people at this difficult time. Particularly contact your own country, and the ambassador for Saint Vincent and the Grenadines, as they hold the presidency of the Council in November. Contact details can be found here.

Use your own words in what you write if you can, it will have a greater impact.

The key points are that the Security Council should:

The Moroccan authorities violated the ceasefire between Morroco and Western Sahara at dawn on Friday 13th November 2020 by sending a group of Moroccan troops dressed as civilians to forcibly drive away the Sahrawi civilians who were peacefully protesting in front of the illegal Guerguerat breach. According to the Polisario Front, the Moroccan army broke through the wall that separates the Liberated Zone of Western Sahara from the Occupied Territories in an attempt to cordon off the area.

The announcement from the Polisario Front that the ceasefire had been violated and they would bring an armed response in retaliation came after the Moroccan army launched its unlawful operation in the Guerguerat pass, a United Nations–patrolled buffer zone, which had been blocked for three weeks by peaceful Saharawi demonstrators. The peaceful demonstrations taking place in all occupied cities of Western Sahara are in response to the end of the ceasefire.

In 1991, the UN-brokered a ceasefire between Moroccans and Sahrawis and established a peacekeeping mission that would help set a referendum on the territory’s future. This referendum has never taken place.

The UN and the European Union are calling for both parties to respect the long-held ceasefire in order to prevent the resumption of the conflict that has been frozen for decades.