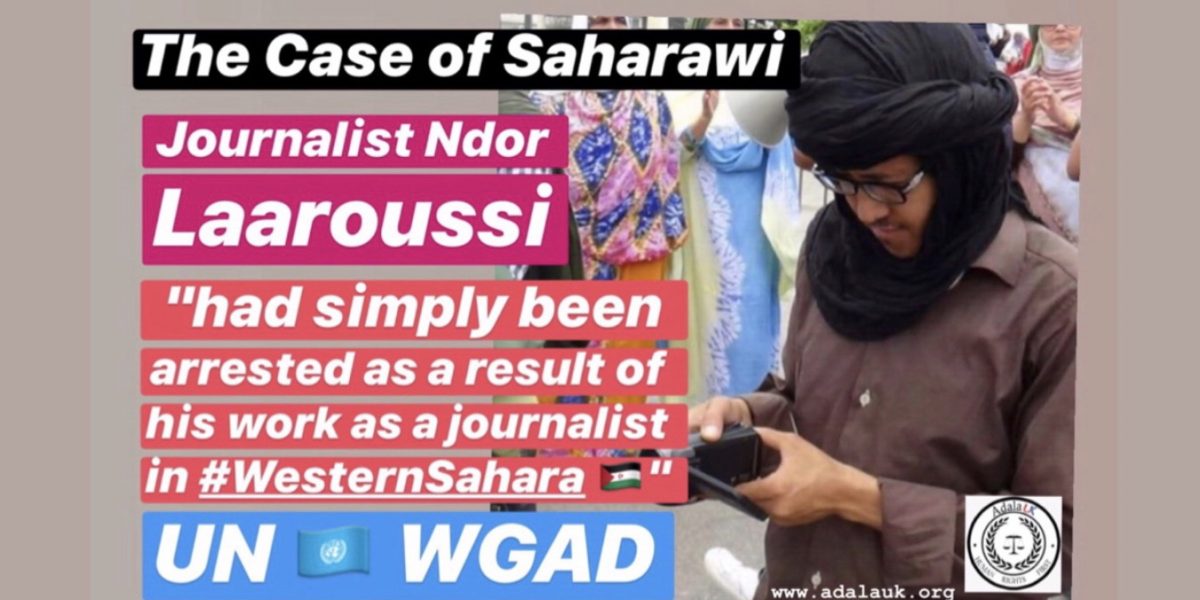 August 13, 2019 Written by AdalaUK. Posted in Most shared, western sahara

The United Nations Working Group on Arbitrary Detention recently concluded in their Opinion regarding the detention of Ndor Laaroussi (Opinion No. 23/2019), that Laaroussi, connected to the Saharawi Journalist organization Bentili Media Center, had been arrested, tortured, and imprisoned in response and in retaliation for his work as a journalist. The decision was published on or around 9 August 2019 (Opinion No. 23/2019). The decision regarding the detention of Ndor Laaroussi can be found here.

A report commenting on the recent decision rendered by the United Nations Working Group on Arbitrary Detention during its 84th session, prepared by Bentilli Media center, The Norwegian Support Committee for Western Sahara and Adala UK is made available here: Arabic version and English version.

The case of Ndor Laaroussi serves as a testament of how Saharawi journalists are targeted by policies and practices of the Moroccan government that result in multiple human rights violations.  The United Nations Working Group on Arbitrary Detention found that the detention of Ndor Laaroussi constituted a violation of Articles 1, 2, 14, 19, 26 and 27 of the International Covenant on Human Rights. civil and political rights and falling under categories I, II, III and V of the Working Methods of the Working Group.

In their decision, the United Nations Working Group on Arbitrary Detention underscored that that Laaroussi Ndour had been subjected to political prosecution in response to and as reprisal for his work as a Saharawi journalist. The Working Group recalled that the expression of a political opinion, including advocating for the right to self-determination for the people of Western Sahara, is protected under international law by article 19 of the Covenant. The Working Group also recalled that the journalist status of Mr. Ndor is protected under international law.

The Working Group further found that that Laaroussi had been targeted due to his connection with the movement fighting for the right to self-determination for the people of Western Sahara and, whilst noting the systematic practice of discrimination against Saharawis, the Working Group concluded that Laaroussi had been arrested, tortured, and detained in response to his political opinions in support for the right to self-determination, constituting discrimination, breaching the equality of human rights (category V).