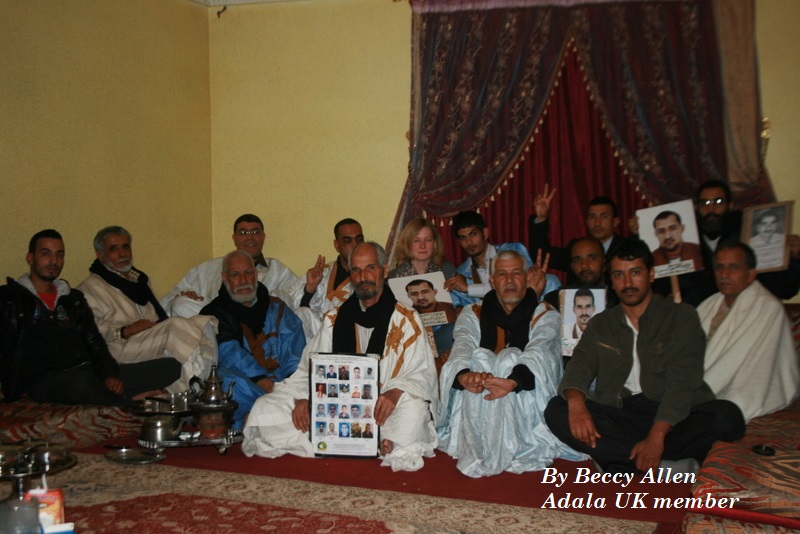 Western Sahara: violations of the right to freedom of expression in the Non Self-Governing Territory occupied by the Kingdom of Morocco

November 13, 2017 Written by AdalaUK. Posted in western sahara No Comments

Since the illegal invasion of Western Sahara by the Kingdom of Morocco in 1975, the country’s indigenous Saharawi people have endured a large scale of human rights violations which affect all areas of their life: freedom of expression, freedom of assembly and association, freedom of movement, the right to a fair trial, the right to education, freedom from torture, and ultimately the inalienable right to self-determination.

Under Moroccan law criticism by anyone of Islam, the monarchy and the Kingdom’s territorial integrity are prohibited. The violations of the right of freedom of expression can take the different forms in the Kingdom of Morocco as well as in Western Sahara.

In the Kingdom itself, the most widespread and insidious form is self-censorship. Moroccan journalists who dare to publicly address one of the three taboo subjects are systematically arrested, imprisoned, and prevented by all means to exercise their profession. In recent years, some well-known journalists have chosen exile in Western countries.

Since the Kingdom of Morocco considers the part of the Non Self-Governing Territory of Western Sahara it occupies being part of its own territory, nobody can openly and freely discuss the legal status of that Territory.

Freedom of expression: the press

Over the last few years, Adala UK has documented many cases of intimidation, kidnapping and detention of Saharawi journalists.

Nazha El Khalidi was arrested on 21 August 2016 by members of the Royal Moroccan police force and taken to a detention centre. She was at a protest, holding a small camera, trying to cover the events and the abuses committed by the Moroccan security forces against the Saharawi population who were demanding respect for their right to self-determination.

Nazha described what happened: “They hit me and caused wounds all over my body, then they interrogated me. The majority of the questions they asked me were regarding my possessions and political ideas on the question of Western Sahara. It’s obvious that what they hoped to achieve with my detention and their threats and torture was for me to stop filming and writing on the abuses they commit.”

The authorities have brought criminal charges against journalists who routinely criticise the Moroccan illegal occupation of Western Sahara. The use of criminal charges against journalists has been criticised by various NGOs and by Journalists without Borders, in particular in relation to the case of Mahmoud Lhaisan, a Saharawi correspondent who was detained for trying to report on a protest.
At the end of 2016, the members of the Committee on Civil and Political Rights[2] expressed their concern about the concurrent introduction of new provisions in the Criminal Code that establish terms of imprisonment as penalties for acts perceived as being offensive to Islam or the monarchy or as posing a threat to the country’s territorial integrity. The Committee called upon the Kingdom of Morocco to revise all provisions, as necessary, to align them with article 19 of the Convention on Civil and Political Rights.

NGOs working within the Occupied Territory are routinely targeted by Moroccan forces or those who work with them to frustrate their attempts to work freely to express the opinions of the Saharawi people. In October 2016, for instance, a group of hackers supporting the Moroccan government’s occupation of Western Sahara was the source of a wave of attacks targeting emails and social media accounts of pro-Saharawi organisations and individuals including Adala UK.

Saharawi activists in the Occupied Territory of Western Sahara say they have been hacked regularly by individuals trying to access their online communications and networks. The hackers have also targeted groups who support the self-determination of Western Sahara but who work outside of the Occupied Territories. Brahim Dahan, President of ASVDH, a Saharawi human rights charity noted: “our webpage was targeted by hackers for a long period of time. Eventually the hackers managed to stop visitors from visiting our site as they were getting viruses”. Sandblast, a British NGO which supports Saharawis in the Refugee Camps through music projects, also had their website hacked and they were consequently offline for a few weeks.

These online attacks on NGOS form part of a hacking campaign which has been running for several years and includes attacks on the most popular dissident blogs against the Moroccan occupation of Western Sahara, such as ‘Equipemedia’ and ‘Western Sahara News’.

“All these attacks launched against blogs and social media networks and email addresses seem to have political motives because photos were posted of the Moroccan King and the Royal Family and phrases such as ‘Moroccan Sahara will always be Moroccan’ were used in the attacks”, commented one Saharawi activist.

One witness also told us: “Following the brutal intervention by the Moroccan authorities against a peaceful protest advocating self-determination in which I participated, I was punched and insulted and taken to the central police station where they tortured me for hours. They asked me how we all communicate in order to organise our protests and they made me give my memorable answer and password for my Facebook account so they could see the ‘chat’ history with my friends.”

Over the last few years numerous cases have highlighted of activists who have been harassed, tortured, imprisoned and even killed by the Moroccan authorities for their political opinions and peaceful demonstrations.

A recent example of an individual case is that of Salah Labsir. Between 2005 and 2013 he worked as media correspondent in the city of Smara and covered many peaceful demonstrations for the self-determination of Western Sahara. His activities led to his persecution by the Moroccan authorities which included forced entry to his parents’ house on several occasions.

In 2013, fearing for his safety, Saleh travelled to the Tindouf refugees’ camps to stay with family members. Two years later, in June 2015, he returned to occupied part of Western Sahara to visit his family in Smara. Salah was detained by Moroccan forces on his arrival in El Aaiún on 6th June 2015, and taken to an unknown location. He was accused of ‘premeditated violence against the police and destruction of public property’ in the city of Smara in 2013. According to his lawyer, the prosecutor was unable to produce any evidence for these charges. In 2016, Salah was sentenced to four years in prison. He lost an appeal even though his lawyer told that the Court was still unable to prove the charges against him. Saleh is still being held in Ait Melul prison in Agadir,

The authorities allow the organisation of peaceful manifestation but forcibly disperse gatherings when they occur, often using excessive force. Sahrawi citizens, including minors, are frequently detained following their participation in peaceful protests and report torture and other ill-treatment during detention and interrogation as well as inadequate prison conditions.

One example of this is a demonstration in late March 2017, when a group of unemployed Saharawi demonstrated peacefully in El Aaiún. A group of 200 people gathered to protest against the marginalisation of Saharawi and the denial of their rights to employment by the Moroccan authorities[3].

According to witnesses interviewed by Adala UK, the Moroccan security forces resorted to an excessive use of force to suppress the demonstrations. At least 27 people were injured and 11 were left in a critical state. Members of the security forces used water cannons and threw stones at the demonstrators and hit people with batons and metal sticks.

The Committee on Civil and Political Rights[4] also expressed its concern about the excessive and disproportionate use of force to disperse unauthorized peaceful gatherings despite the issuance of a circular by the Ministry of Justice and Freedoms in October 2015 which states that police intervention is justified only in the presence of an armed mob and/or when a crowd has gathered that is likely to disturb the peace.
The Committee stated that the Kingdom of Morocco should ensure that the law governing peaceful demonstrations is applied in accordance with the Covenant and that the exercise of that right is not subject to restrictions other than those that are authorized under the Covenant.

Since the occupation of a large part of the NON Self-Governing Territory of Western Sahara, the Kingdom of Morocco has blocked the process of decolonization of the Territory and continues to deny to the indigenous population of Western Sahara to freely exercise their inalienable right to self-determination by violating a wide range of fundamental human rights, including the right to freedom of expression And the right to freedom of peaceful assembly and association.

Therefore, we call upon:

Ø the Kingdom of Morocco to fully implement the recommendations of the Committee on Economic, Social and Cultural Rights as well as those of the Human Rights Committee;

[1] This written statement benefited from the assistance of Adala UK, a NGO based in the UK which advocates for the respect of human rights in Western Sahara and raises awareness about the ongoing conflict in the area. Adala UK’s members in the Occupied Territory of Western Sahara gather information about human rights violations and report to UN bodies and large human rights organisations. [2] CCPR/C/MAR/CO/6 (par. 43 [3] The work situation in the Occupied Territory is particularly hard for Sahrawi citizens, as jobs created by the Moroccan government are allocated to Moroccan citizens, both settlers and individuals who commute from Moroccan cities. [4] ibid, par.45