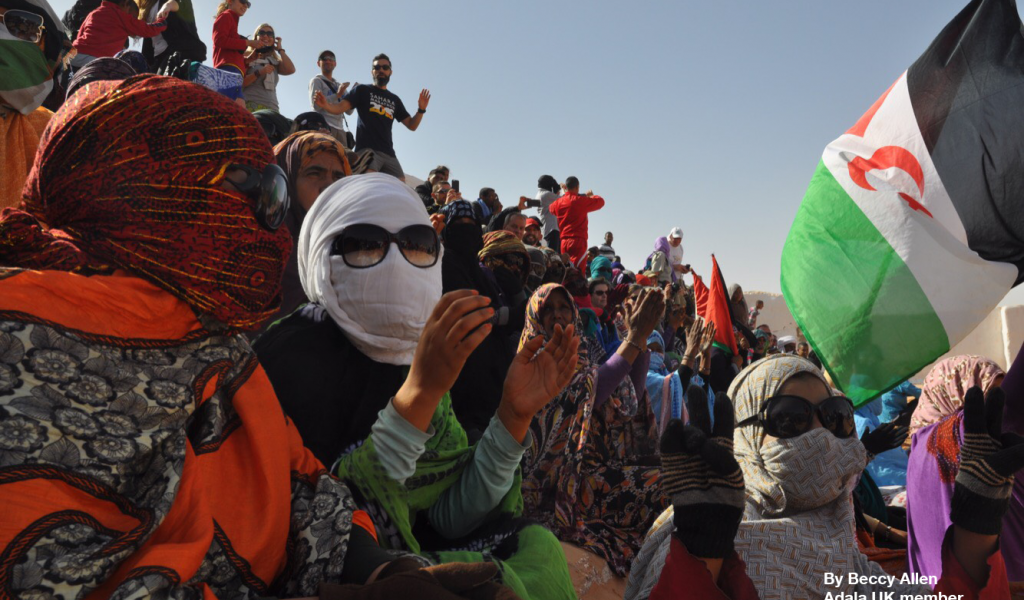 Saharawi women are extremely well-respected in their society and enjoy equal rights to men. A large number of them are leaders of NGOs and other social and human rights associations. Like all Saharawi in the occupied territories they also suffer from the political, social and economic apartheid.

Their participation in demonstrations and the peaceful movement for self-determination is enormous, in spite of the beatings, humiliations and daily aggressions they are subjected to by the Moroccan authorities.

Although at the moment there are no female Saharawi political prisoners there are many ex-political prisoners, some of them imprisoned for over 16 years. They were subjected to all kind of torture, blindfolded for years in a row and victims of forced miscarriages during the torture process.

Saharawi women suffer, like all women in a conflict scenario. Due to the discrimination of the Saharawi Population at the hand of the illegal occupier they have no jobs, to study they have to leave Western Sahara, they have no right to freedom of expression or movements, they struggle daily to put food on the table, the cuts in the water supplies to the Saharawi households are one added problem for women.

Medical assistance is inadequate and discriminatory, while pregnant they don’t have access to the needed specialized assistance and there is a severe increase of miscarriages and still born. Women do not want to go to the hospital due to the fear that something could happen to their new-born. The presence of police officers in the surgery room and delivery room in the hospital of Laayoune is common. They do not disinfect and observe the procedures, sometimes “recommending” that no anaesthesia should be administrated.

As mothers the Saharawi women suffer again, they know that their children are beaten and miss treated in the schools, like they where, the know that young Saharawi girls are victims of sexual harassment by the police in the streets, as they were. There is no safe place for the Saharawi in the occupied territories.

As mothers and wife’s of the political prisoners another ordeal awaits them, long distances to travel to visit the prisoners, only to arrive most of the times and being arbitrarily denied the visitation rights. The increase in expenses when a family member is in jail (for travel, to buy essentials in prison, etc) leaves the women in even worse economical status. As men are mostly the sole breadwinners.

But also in their daily life they are victims of the attacks of the Moroccan police auxiliary and military forces.

Mrs. F.M , was in her house when she heard the cries of her neighbour “they will kill my daughter, help me!”, Mrs. F.M opened the interior door and was looking out the exterior metal door, when the police started throwing stones. Several stones hit the door and one entered through the metal net and hit directly in her face.

The police abducted Mrs. Lalla Moussaoui, ex-political prisoner . She is known activist and was warned not to attend any demonstrations. Mrs. Moussaui, mother of three and 5 month pregnant, was abducted by the police, tortured and abandoned afterwards. She was found unconscious.

Mrs. Moussaoui does not know if she lost her child, no medical assistance was given to her , to be treated she has to leave the territory urgently.

Adala UK believes that it is urgent that the European Parliament invites Mrs. Moussaoui and hears her testimony. The grave human rights violations that increase on a daily basis registered by Adala UK and other NGO’s most be denounced, the European Parliament has to take some kind of action to prevent the Moroccan government to continue to behave as if there are no laws.

The fishery, agricultural and economical agreements that are in place between the Moroccan government and the European Union, have included in the text that human rights of the Saharawi people have to be respected. But this is not the case.