The time is now: Human Rights of the Indigenous Saharawis must be respected.

December 10, 2015 Written by AdalaUK. Posted in Most shared 1 Comment 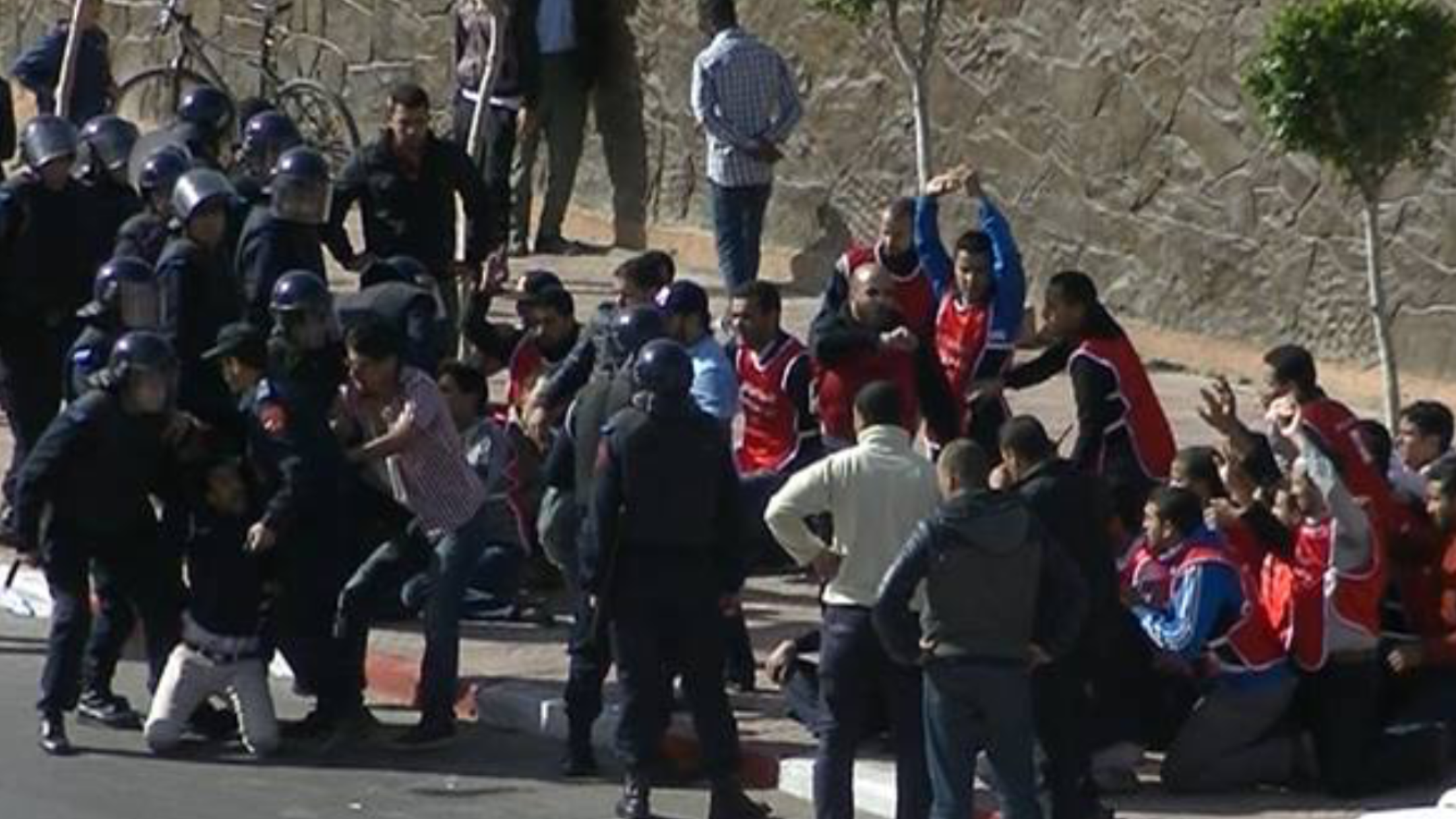 8th December 2015, El Aaiún: a peaceful demonstration about the high cost of living and unemployment; issues that more acutely affect the Saharawi population, above all recent university graduates. The majority of those demonstrating are graduates with degrees and Masters in many different subjects. All demonstrators ensure they remain peaceful and do not block the traffic.

The demonstration took place at midday on the Mecca Road, taking up the whole street. The demonstration was organised by the Unemployed Graduates Group and OCP Skills Sahara. Though the protest was peaceful, members of Adala UK who were present observed many demonstrators being attacked and abused by uniformed and plain clothes security service personnel. They were hit with batons and sticks and punched. Several victims, including some women, were injured as a result, with wounds to their head and face.

“Two officers took my placard from me, on which I had written that the wealth of natural resources in Western Sahara should guarantee me a job. They pushed me and hit me in really sensitive parts of my body. I fell to the ground and I was trampled on” said Salka, one of the Saharawi demonstrators. Adala UK received news that several demonstrators were also taken to hospital but they were denied copies of their hospital records which document the injuries with which they had presented. This prevents them from being able to file complaints and seek justice for the attacks they suffered. According to statements given by Adala UK members, security forces detained one Saharawi, Mohamed Babait for several hours. His fellow protestors gathered outside the police station where he was eventually released at 6pm. 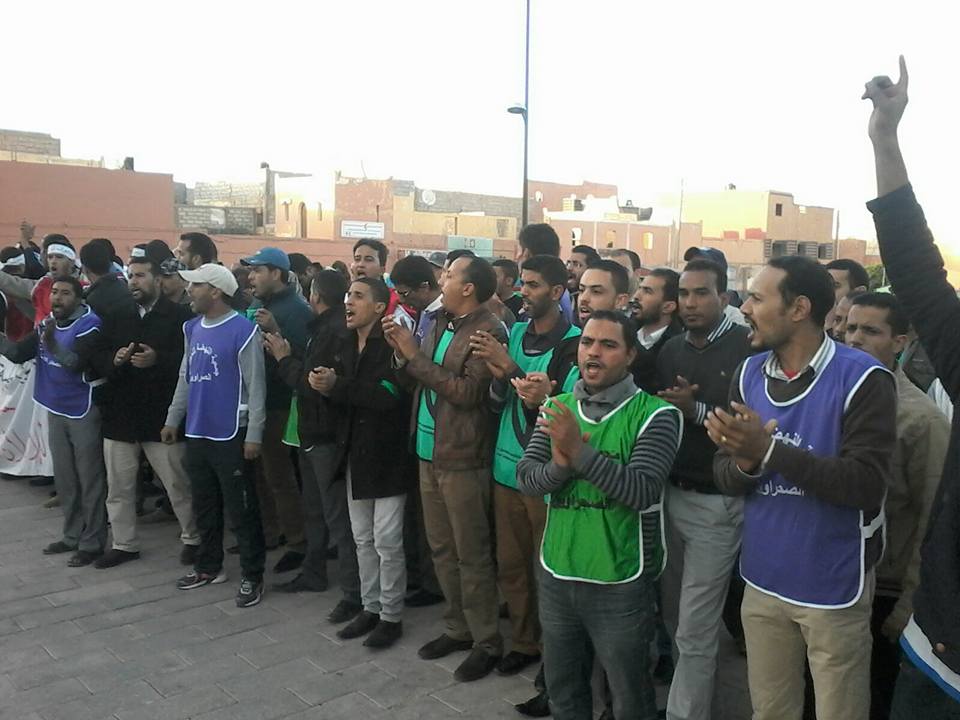 Last month the Moroccan Governor of the Sahara Region, whilst celebrating the 40th Anniversary of the occupation of Western Sahara, promised 1200 jobs for native Saharawis at the Fusbokraa factory (where phosphates plundered from the Western Sahara are dried and sold by Morocco). However, last week, the factory announced the conditions of these jobs on their website. These conditions included having studied degrees which Saharawi students are prohibited by Morocco from studying at university. The Saharawis hoping to apply were understandably angry at the situation and came out en mass to demonstrate. The repression of their peaceful demonstrations represents a gross violation of the right to freedom of expression.

“Since the Governor made his announcement, Moroccans have been flocking to Western Sahara, changing the place of residence on their identity cards to an address in Western Sahara. On top of all the settlers who already live here this is just too much! The occupation is never going to give us the right to anything even though we are living in our own country” said one Saharawi, a gradute of international law. “The Moroccan government has had a policy of trying to change the demographic of Western Sahara since 1975 when they first occupied our land, with some 350,000 Moroccans – both civilians and military personnel. What we’re seeing now is part of this policy: giving rights to Moroccan settlers before native Saharawis” said another Saharawi, a graduate in English Studies who was injured during the demonstration.

The indigenous Saharawi population has been driven from their lands due to the discriminatory policies of occupation and the economic interests of the Moroccan government since 1975. By depriving the Saharawis of resources and cultural traditions which are fundamental to their well-being and survival, the majority of Saharawis are unable to enjoy basic human rights including the right to employment, food, health, a home and cultural rights. They suffer from marginalisation and live in poverty.

Adala UK urges the international community to work with the indigenous Saharawi people to guarantee their protection and the recognition of their rights – both to their land and their self-determination, as promised by the UN in 1965. A promised which has still not materialised.

Below is a photo of Baibait Mohamed at the moment he was arrested: 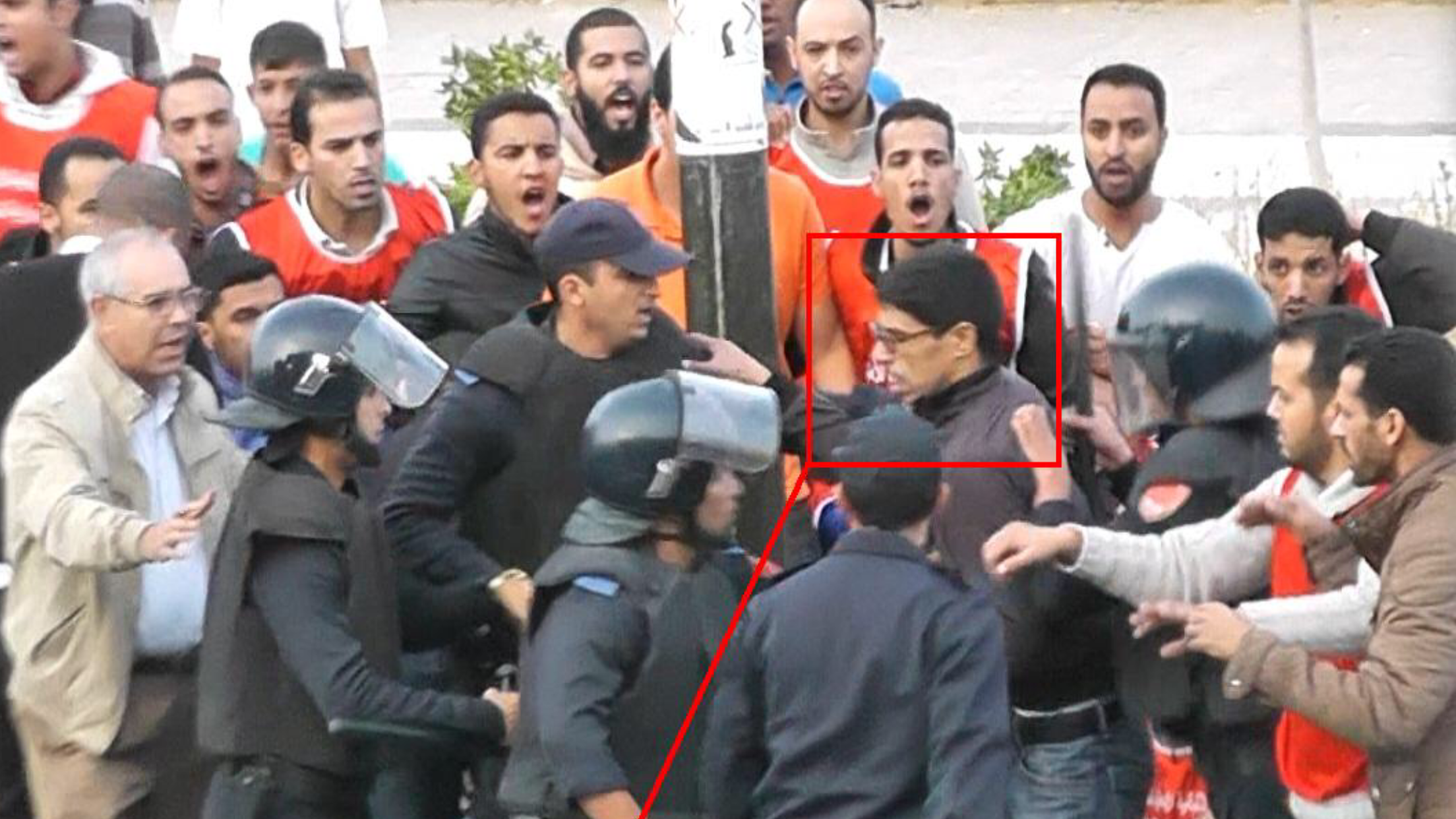