Setting the Record Straight – Recent Demonstrations in the Occupied Territories of Western Sahara:

November 26, 2015 Written by AdalaUK. Posted in Most shared

Following widespread reports on social media regarding large scale demonstrations against MINURSO in the Occupied Territories of Western Sahara, Adala UK can report on the actual situation on the ground following updates from members. Thousands demonstrated in the Western Saharan capital, coinciding with the speech given by the King on the 40th anniversary of the Green March. His words represented a decisive response to the international pressure for Morocco to agree to the Saharawi people’s right to a referendum on self-determination.

The demonstrators were Moroccan settlers, not Saharawis. “Moroccan plain clothes police officers and settlers walked towards MINURSO asking them to leave. And what angers us most as Saharawis is that they are claiming that MINURSO leave in our name, even though they were all Moroccan” reported one Adala member. The protests caused disruption to public transport in many areas of the city for several hours. Thousands of Moroccan settlers were marching in the streets chanting racist slogans against the Saharawis and promising revenge against the Saharawi population. According to reports gathered by Adala members in El Aaiún, many Saharawis were assualted by Moroccans during the demonstrations. 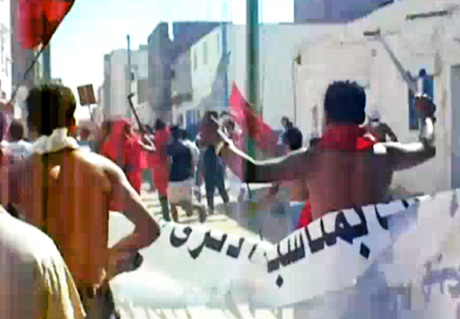 The demonstration was dispersed near the Ben Lmahdi Hospital, about 300m from the MINURSO headquarters. Demonstrators then split up into groups and went off in different directions around the city heading for areas where Saharawis live and shouting for the departure of the UN Mission. Chants included “Death to the Saharawi enemies – the King has his kingdom!” and “death of the Polisario Saharawis” as well as “The King is in Rabat and the Saharawis are under his shoes”. One Adala member reported that they heard Moroccan settlers saying: “We are not going to permit the Saharawis who are in favour of independence to live here in the Sahara. They have many places they can go. They can go to the Tindouf refugee camps”.

This is indicative of an escalation in the involvement of Moroccan settlers in the Moroccan government’s occupation of Western Sahara. Many settlers have been armed by the Moroccan military. In addition to calling for the expulsion of MINURSO, they have threatened to return to armed conflict and are using this as a bartering chip against the international community if they move towards organising a referendum for the Saharawi people.

The Moroccan government has incentivised Moroccans to settle in Western Sahara. Settlers are given support to buy houses, or have been allowed to occupy Saharawi properties that were abandoned in 1975 when their owners fled from the bombs being dropped by the Moroccan army.