Portuguese President Mr. Marcelo Rebelo de Sousa stressed that a letter sent by Adala UK about the situation in Western Sahara deserves attention from the Government of the Portuguese Republic.

His statement came in a response to a letter from Adala UK in Portugal, which demanded the release of Sahrawi political prisoners, in particular the Gdeim Izik Group, and the need for the people of Western Sahara to exercise their right to self-determination.

The Portuguese President noted that he takes into account the provision of Article 135 of the Constitution of the Portuguese Republic regarding how the government implements Portuguese foreign policy. Consequently, the letter was sent to the Ministry of Foreign Affairs, which is the appropriate public authority to deal with these issues on behalf of the President of the Republic.

You can read a copy of the letter below: 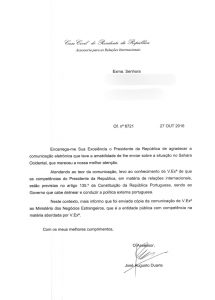