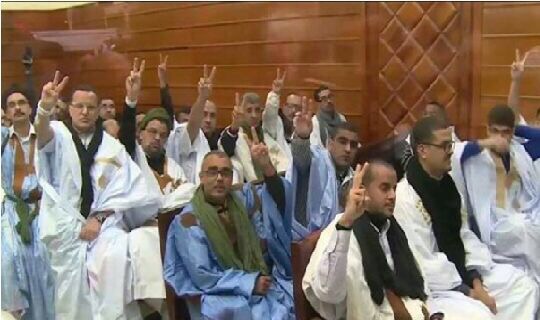 The trial of the Gdiem Izik Group of Saharawi political prisoners is a clear example of the failings of the judicial system in the Kingdom of Morocco; a system that is neither just nor independent.

The long sentences imposed on each of the political prisoners reflects the practice of the Moroccan authorities to continually ignore national and international legislation.

The judge who confirmed the life sentences which were originally imposed in 2013 by a military court, and the other sentences which range from 20 to 25 to 30 years. The trial remains totally illegitimate given that the reasons behind each of the sentences have still not been made clear.

The Saharawi political prisoners were exercising their right to freedom of peaceful assembly in defence of their right to self-determination. Yet this was the reason that they were arrested, disappeared and tortured by the Moroccan authorities who eventually extracted confessions under great duress. These confessions extracted under torture were allowed as evidence in the trial.

On 15 November 2015, the UN Committee on Torture arrived at the conclusion that the Kingdom of Morocco had violated the Convention Against Torture on a number of occasions in the case of the Saharawi political prisoner Nama Asfari. The Committee also arrived at the conclusion that the authorities had not investigated Nama’s allegations of torture and other cruel, inhuman and degrading treatment to which he was subjected. Nama was denied his rights, including the right to receive medical attention for his injuries.

Adala UK considers that this type of unjust trial reflects the disregard that the Moroccan authorities have for national and international legislation with regard the protection of prisoners and the protection of human rights. The prisoners and their families should receive justice but a justice that is open, honest and which guarantees legal procedures, not a justice that is sought on the basis of evidence extracted through torture and a response which is sought for political revenge.

We demand that these sentences be annulled and the political prisoners be tried by a court which abides by international standards. Adala UK calls on the Moroccan occupation regime to respect Morocco’s commitment to international legality and bring an end to the crimes which are perpetrated against Saharawi civilians which includes the systematic violation of their human rights through arbitrary detention, unfair trials, and torture and rape of Saharawi detainees and prisoners in Moroccan prisons.

Unfair trials by Moroccan courts have imposed many long and unfair sentences on many Saharawi civilians. Peaceful protestors, journalists and human rights defenders are all paying the price of a brutal repression carried out by the government of the Moroccan occupation and its various security forces in revenge against the political position of anyone who supports the people of Western Sahara.

Adala UK urges the UN and the Security Council to expand the mandate of MINURSO to include a human rights monitoring mechanism in Western Sahara. We also urge the international community to act to bring an end to the Moroccan regime’s abusive practices which are used against the peaceful Saharawi people.