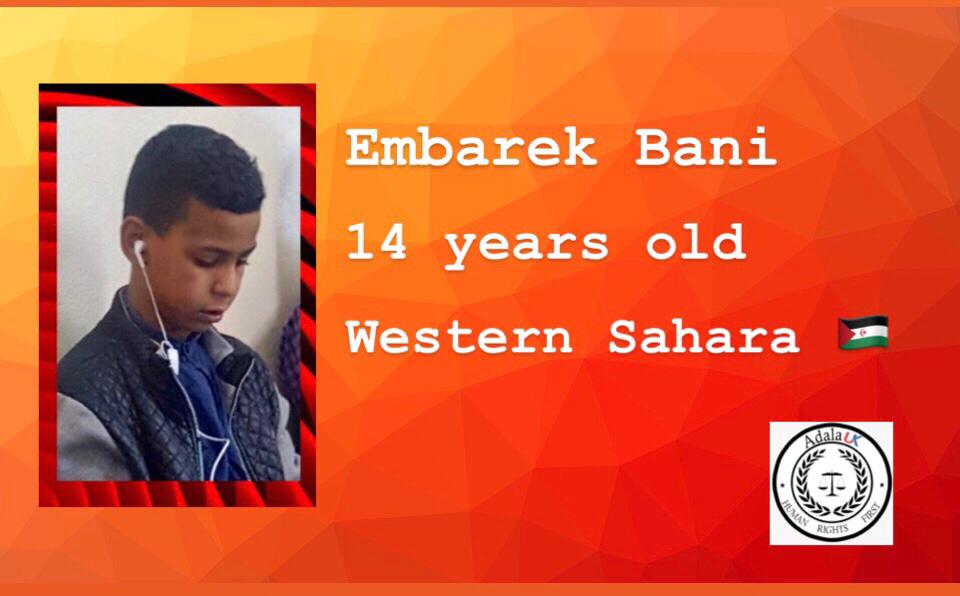 June 10, 2019 Written by AdalaUK. Posted in Most shared No Comments

On 26th May 2019, Moroccan police forces arrested 14-year-old Saharawi Ambarak Mohamed Bani near Morabitine School on Smara street in occupied el Aaiun, according to the boy’s family. They took him to the police station where Ambarak was tortured, causing injuries and bruises, and threatened with more violence. Photos and records were produced during this time without informing Ambarak’s family about their content.

His mother told Adala UK: “The police kidnapped my son from school and held him in the police station until 4am before letting him go. He was heavily beaten by police officers during the arrest and at the police station. They told him they knew him because he is the son of a prisoner. The police is responsible for everything that happened and will happen to my son as well as for the accusations which are being fabricated against my son.” (see video)

Ambarak is the son of one the political prisoners of the Gdeim Izik group, Mohamed Ahanini Bani, who is serving a life sentence in Ait Melloul 2 prison, following an unfair trial which was described as lacking minimum international legal standards by international human rights organisations such as Human Rights Watch and Amnesty International.

Ambarak’s case is one of hundreds of reports of crimes, torture and atrocities committed by Morocco security forces against Saharawi citizens living in the occupied territories of Western Sahara. Even though many cases are reported to the authorities, there is widespread impunity, including for abuses of minors.

Adala UK urges the Moroccan government to investigate the reports of violence committed by its security forces in Western Sahara and to take measures to protect the Saharawi population, in line with international humanitarian law and the UN convention on the rights of the child, to which Morocco is a signatory.

Adala UK also reiterates its call to the international community and the United Nations to send international observers to the Occupied Territories of Western Sahara to guarantee the protection of Saharawi citizens’ human rights.