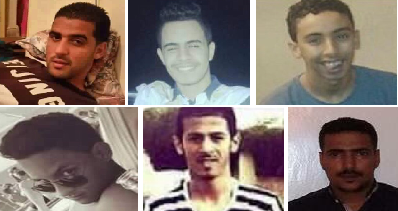 October 19, 2015 Written by AdalaUK. Posted in Most shared No Comments

In what can only be described as a shambolic trial, a Moroccan court has found seven young Saharawis guilty in a trial that took place less than 48 hours after they were arrested following a protest in Dakhla. On Tuesday 29th September, each of the seven young Saharawis was sentenced to six months in prison and fined 2000 Moroccan Dirham (around US$160).

Fatma, a member of Adala UK in Dakhla has called the sentences a ‘reprehensible injustice’. The young men were, according to witnesses, subjected to torture and public maltreatment during their detention. Such abuse was made illegal in Morocco a few years ago, but the practices persist. Judges and other legal representatives have as yet investigated the claims of torture and maltreatment and this impunity counteracts the extent to which the new Morrocan legislation can deter officials from committing torture.

Adala UK is worried by the speed with which this trial was set and the fact that the defendants were not given the opportunity to call upon lawyers. We believe this was done so as not to allow the opportunity for the claims of torture to be investigated.

According to our members in Dakhla, the Saharawis and members of the Saharawi press who attempted to attend the trial were denied entry at the doors of the court, including the family of the young men on trial. Amongst those on trial were: Abdelaziz Barray and Mohamed Lafdil, both of whom are ex-political prisoners. In addition to the seven detainees, two others were being held: Anhand Abdeslam and Khalihanna Bused. They are both under age and were put on conditional release.

Three days later, and part of the same trial, the youth Abdelfatah Sid Azain (17 years old) was sentenced to 30 days loss of freedom, following three days in custody. He was transferred to a detention centre for young offenders in Agadir (Morocco) to complete his sentence. The sentence was passed during a closed session of the court.

The accused were subjected to abuse and the use of excessive force on the part of the police and the army during the protests. They were not part of any violence and the young men were simply in the wrong place at the wrong time. But all are victims of this farcical trial which was conducted under political motivation.

Contrary to the official version told by the Moroccan occupation authorities, which outlines a large-scale and violent protest, according to information from our members, the only violence was committed by the hands of the police and other Moroccan forces. Not one police official has been brought to justice for these abuses.

Adala UK calls for the immediate and unconditional release of Abdelaziz Barray, Mohamed Lafdil, Ahmed Hmaiyada, Ahmed Salim Ahl Amaidat, Sidi Haiba Sannad, Yahdih Chilh Omarubala and Mohamed Isalmu Taleb Omar. All are political prisoners. They did not receive a fair trial and their sentences for taking part in large-scale disturbances should be repealed.