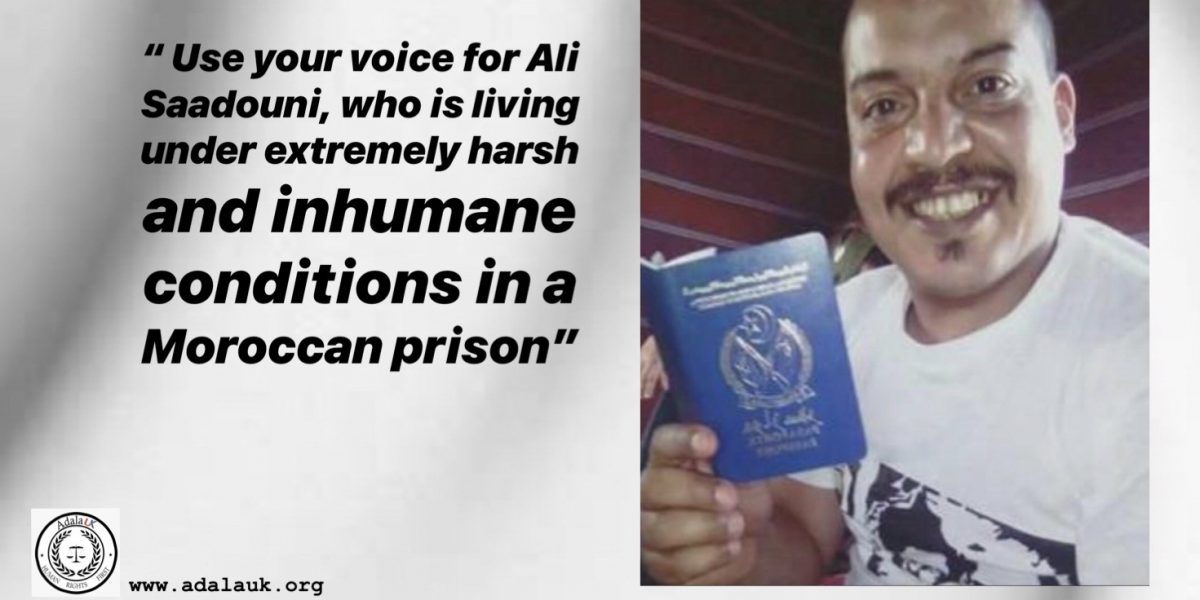 July 9, 2019 Written by AdalaUK. Posted in Actions, Most shared No Comments

Ali Saadouni is a former political prisoner and a prominent Saharawi human rights defender known for his membership in the “Coordination of those rejecting the Moroccan nationality”.

Ali Saadouni was arrested on 11 April 2019. The arrest of Saadouni came in response to a demonstration held on Tuesday 10 April 2019, wherein Saadouni, together with other activists, had displayed several Western Sahara flags in a roundabout in El Aaúin. The demonstration was filmed and footage of the demonstration went viral on social media.

The next day, on Wednesday 11 April, Saadouni was arrested around 10:00 pm at a car depot in Al-Quds neighbourhood along with Khaliehna Elfak. They were arrested by several men jumping out from an unmarked white car that had been following Saadouni around the whole day. The men dragged both Saadouni and Elfak into the back of the car. While in the car, Saadouni was blindfolded and both Saadouni and Elfak were subjected to physical abuse, verbal harassment and humiliation.

Elfak was released from the car after approximately one hour, whilst Saadouni was taken to an unknown location on the outskirts of the city of El Aaúin. Saadouni was held at this unknown location for two days, during which time he was subjected to torture. The torture happened under the supervision of the security chief, whom hanged Saadouni from the ceiling, upside down, with his legs tied together. The officers subjected him to various kinds of torture while placed in this position.

After two days and two nights, Saadouni was presented in front of the King’s prosecutor in the Court of First Instance in El Aaúin. During the hearing, Saadouni told the judge that he had been subjected to torture, at the same time bearing visible marks from the torture on his body. He had bruises on his back, thighs and feet in addition to marks on his feet from being suspended from the ceiling. Nonetheless, On 15 April, the detention of Saadouni was ordered, and he was sent to the “Black prison” of El Aaúin. On 29 April, Saadouni reappeared in front of the Court of First Instance in El Aauin. Saadouni had been charged with the act of drug possession and for assaulting a police officer. The charges against Saadouni was not corroborated by any evidence. As for the drug charge, the prosecutor stated that a number of drugs were seized on Saadouni, but thrown away during the arrest. As for the assault charge, the victim of the alleged assault was not present during the trial, but represented by a lawyer. Despite the lack of evidence, Saadouni was found guilty, and sentenced to seven months in prison, and a fine of 5000 dirhams by the Court of First Instance on 29 April. On 13 June, Saadouni was condemned to five months in prison by the Court of Appeal in El Aaúin. Saadouni is currently detained in the “Black prison”, local prison, of Layoune.

Adala UK is extremely concerned by the arrest and imprisonment of Ali Saadouni and finds that the arrest of Saadouni is arbitrary, violating articles 14, 19 and 26 of the International Covenant on civil and political rights, and articles 9, 10 and 19 of the Universal Declaration on Human Rights.

Adala UK asks you to write to the Moroccan authorities, and ask them to:

I. Ensure that Ali Saadouni is immediately released from prison as his imprisonment is to be considered arbitrary, as

(i) his imprisonment results from his exercise of his fundamental right of freedom of opinion and expression, as enshrined in Article 19 of the International Covenant on Civil and Political rights;

(ii) the non-observance of the international norms relating to the right to a fair trial is of such gravity that it renders his detention arbitrary;

(iii) the arrest and imprisonment of Saadouni constitutes racial discrimination as he is imprisoned in response to his opinion relating to the right to self-determination for the people of Western Sahara and due to being Saharawi.

II. Launch an independent investigation into the circumstances evolving the arbitrary deprivation of liberty of Ali Saadouni and to take necessary measures against the responsible parties
Contacts:

• Permanent Representative of the Kingdom of Morocco to the United Nations Office at Geneva and other International Organizations in Switzerland – 18a Chemin François Lehmann, 1218 Grand Saconnex, Fax: + 022 791 81 80 41 Email: mission.maroc@ties .itu.int