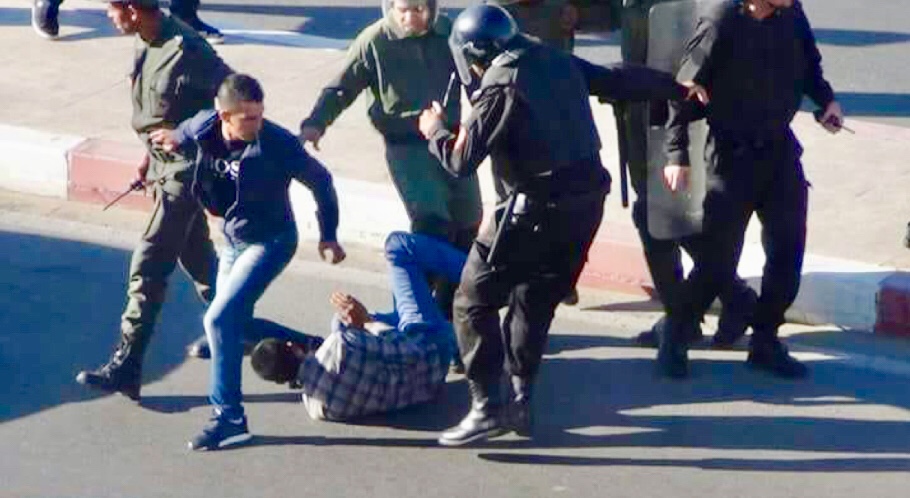 July 7, 2018 Written by AdalaUK. Posted in Most shared No Comments

The creation of a siege, a wave of arrests, police violence, demonstrations and a media blockade.

The UN Special Envoy, Horst Khöler, recently visited the region of Western Sahara in order to gain a deeper understanding of the conflict. The Special Envoy, following a visit to the Saharawi Refugee camps in Tindouf (Algeria), arrived in the capital of Western Sahara, Layounne, on 28 June 2018. He toured the region until 1 July. In relation to the visit of the Special Envoy, repression against the Saharawi population and demonstrators calling for the right to self-determination has been growing.

Read the full report and our recommendations concerning the repression on the Saharawi people in relation to the visit of the UN Special Envoy to Western Sahara here.

In direct relation to the visit of the Special Envoy, Adala UK witnessed an apparent growing repression of Saharawi civil society and growing use of police violence towards demonstrators. In the run-up to the visit by Mr Khöler, the Kingdom of Morocco systematically intensified the grip of repression in the occupied territories of Western Sahara, transporting thousands of police officers, auxiliary and gendarmerie forces to Western Sahara from Morocco. Prior to the visit, more than 50 Saharawis were arrested in the occupied territories in relation to the visit of the Special Envoy. Whilst many have already been arrested, others run the risk of being arrested and prosecuted, facing constant threats from the Moroccan authorities. Two children are amongst the protestors who have been arrested over the last few days: Hamza Aalbouchekra and Mansour Moussaoui. Both children reported to the court that they had been tortured and subjected to other kinds of inhumane treatment and harassments whilst held in custody.

Despite the siege imposed by the Moroccan regime and police, demonstrations were held in the biggest cities of Western Sahara between 28 June and 1 July. Protesters chanted slogans in favour of the right to self-determination, demanding justice after more than 40 years of Moroccan occupation and repression, aiming to send a message to the UN Special Envoy. Following the demonstrations held in the largest cities of occupied Western Sahara on 28 June, over 120 Saharawi demonstrators were left with serious injuries, after being subjected to comprehensive police violence.

The case of Ayoub Rich is one of grave concern. Ayoub, an 18-year-old Sahrawi, was, according to eye witnesses and members of his family, deliberately hit by a policeman driving a police car during the protests held in Layounne, the capital of Western Sahara, on 28 June. After he was hit by the car, he was taken to the local hospital in Layounne in a critical condition and was kept away from his family and friends. His family were not allowed to visit him and they were not given any information from the authorities. They were also subjected to comprehensive police violence and arbitrary arrest.

In relation to the visit of the Special Envoy, and the creation of a siege, the arbitrary arrest of more than 50 Saharawi activists and the comprehensive police violence in the streets of Western Sahara, Adala UK is deeply concerned by the ongoing repression of the freedom of the press in the occupied territories of Western Sahara. In relation to the urgent need for human rights monitoring, we note that the ‘media blockade’ in the occupied territories of Western Sahara is tightening, and that self-censorship has become the norm. According to witnesses:

“The Moroccan authorities instruct the local and national media channels not to cover the events or interview people who could criticize the political situation in Western Sahara in general.”

According to members of Adala UK, at least seven Saharawi journalists have been injured since these demonstrations began and at least three have had their equipment stolen, while the transmission of several websites and Facebook accounts and independent local news blogs that covered the demonstrations have been blocked or censored. Simultaneously, the Moroccan media is subjected to strict repression, and self-censorship has become the norm. In the Moroccan media, demonstrators have been proclaimed as “traitors and saboteurs”, who received money from foreign powers, and cases of police violence have been denied.

Adala UK argues that, given the current ‘media blockade’ in the occupied territories, with the expulsion of international observers and journalists, monitoring and reporting on the human rights situation in Western Sahara has become an almost impossible task.

Adala UK calls on the United Nations and the Security Council to extend the mandate of the United Nations Mission for the Referendum in Western Sahara (MINURSO) to include a mechanism to monitor the situation of human rights in Western Sahara, to ensure that human rights violations are reported and documented, and to end the current climate of impunity.