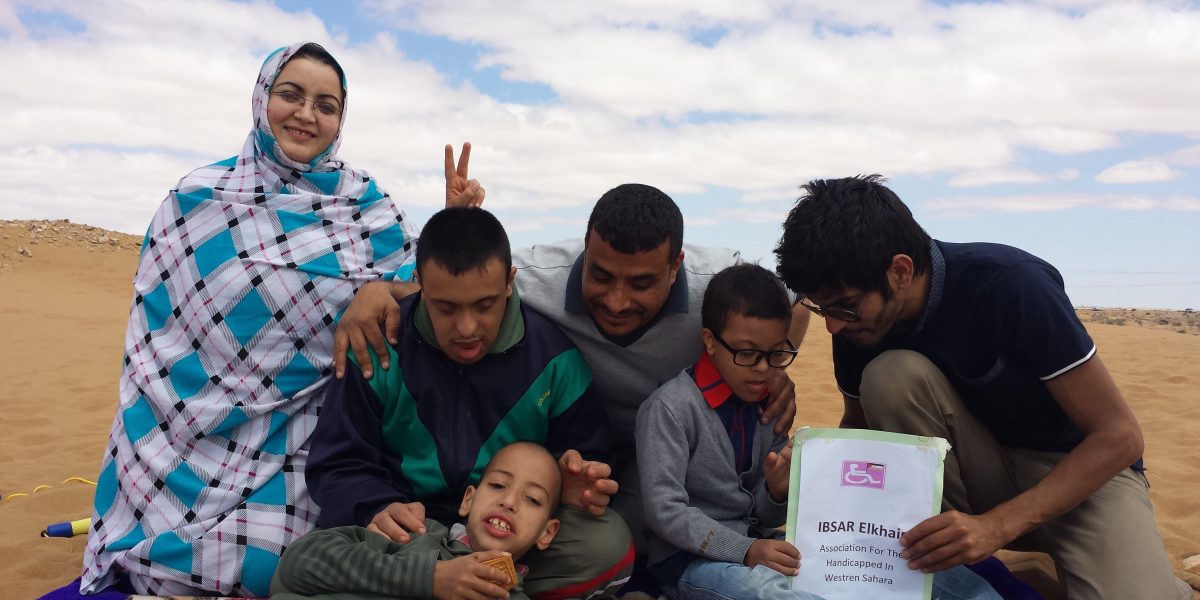 November 14, 2017 Written by AdalaUK. Posted in western sahara No Comments

Morocco is a signatory to the UN Convention on the Rights of Persons with Disability which was adopted in 2006 and ratified by Morocco in 2009.

The few organisations providing services to Saharawi people with disabilities depend entirely on donations from the
Saharawi population, as they are not financed or supported in any other way by the Moroccan state. Reasons for this are entirely political, as the Moroccan state would never support organisations which are pro self-determination of the Saharawi people and all Saharawi-led organisations automatically fall into this category. Over the past year,
unemployment and poverty rates among the Saharawi population have increased significantly which means that
disability organisations are now forced to reduce their services or to close as their already weak supporter base is
dwindling further.

Disabled people of Saharawi origin confirm not only have difficulty accessing medical and rehabilitation services but
also rarely have access to education. As a result, they are unable to obtain paid employment, which is already difficult
for Saharawis. In many cases, they are unable to lead a dignified life, forced into begging and poverty, relying on the
help and goodwill of others. Disabled people are also often subject to rape and other abuse.

Sidi Mohamad Aluat, President of the disability NGO ‘Absar Al Khayr’, based in El Aaiun, says ‘The
Moroccan authorities do not allow us to register our organisation and we do not receive any government
support due to our political position with regards to the status of Western Sahara and our belief in the right to
self-determination. When we demand our rights as people with disabilities, or join political demonstrations,
these are always brutally suppressed by the Moroccan forces.’

Said Hadad. a Saharawi man with a physical disability, stated that he had presented seven complaints of
police violence to the Moroccan king’s public prosecutor in El Aaiun but none of these had ever been
investigated. His latest complaint was filed on 18th February 2015 under archive number 15/3126/17.
Similarly, Housine Nasiri, another disabled man, told Adala UK that he had presented over ten official
complaints of physical and mental force used against him to judges in El Aaiun which were also not
investigated. His latest complaint was filed on 18th February 2015 under archive number 15/3126/16.
During 2015, the Moroccan authorities forcefully broke up peaceful protests by people with disabilities in Western
Sahara, acting indiscriminately for instance against people in wheelchairs, under the pretext of ‘maintaining public
order’.
Any human rights violations committed against people with disabilities or any other citizen should of course be
investigated and those responsible brought to justice. Unfortunately, judges and public prosecutors, as we have seen
from the above accounts, do not investigate torture allegations and the climate of impunity of course means that
legislation alone has no deterrent effect.
In order for the situation for disabled people in the Occupied Territories to improve, it is crucial to end the blockade on international NGOs and human rights organisations and observers to enter Western Sahara. More pressure is needed
A/HRC/31/NGO/1723
from the International Community and specifically the UN to remind Morocco of its specific responsibilities according to the Convention on the Rights of Persons with Disability.
The Moroccan authorities must allow Saharawi disability organisations to operate freely, including being able to
officially register and receive financial and other support from abroad, irrespective of the organisation’s political
views. Furthermore, the Moroccan government must provide the same services and assistance to Saharawi citizens with disabilities as those of Moroccan origin, without discrimination.